Our Comrades Journey on Video 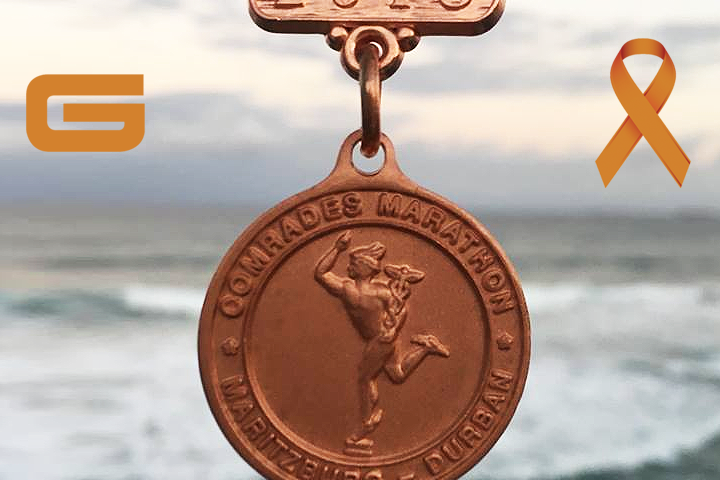 Comrades done and dusted! I could write forever, and ever, about the day, but I will try to keep this post as short as I can. ✅Please share the post peeps..... Thank you. Here goes.....

☘”Getting collected”
Rohan picked us up at 200am, in the “Big G Branded Bus”. We were beyond excited, and ready for 90.184km in The Ultimate Human Race. We picked up most of the team on the drive up. Needless to say, their was an excessive amount of hugging and high-5’s during this drive.

☘”Arriving early”
We arrived super-early and had some coffee and rusks, and final pep-talks were made.

☘”Problem 1 at the start”
We then started to move to our start line. We were allowed to start, with 2 other wheelchair runners, 5 mins before the elite runners. However, we left it a little late to get there. When we pushed our way through, a runner ran across our path and slammed into the front wheel, bending it severely. My heart sank. We had planned for 10 months, and Andrew had spent the entire Saturday making sure that the front wheel was meticulously running at a straight angle. We knew we could get the wheel reasonably straight, but not the way we needed it to be. In a split second, I knew that this was going to be a problem - for 2 reasons. Firstly, as the front wheel does not turn, Andrew has to lift the 3-wheeler, every 10 seconds, to set its direction. This would now mean he would have to do this for 90km, adding to his day of pain. Secondly, as I feel every bump and cats-eye on the road, I realized that every time Andrew lifts the bike, I will feel the bump of the bike hitting the road. But that is how it happened, and that there was nothing we could do about it.

☘”Problem 2 at the start”
As we had left it a little late, the gate cordons were already set up, and they wouldn’t allow us through. My race number had “G Batch” on. Rohan appealed to a kind security guy, who must be commended on what he did next (we were to start in about 12 mins). He turned us back around, took us around the block, knocking down blocked off areas, and raced us to our start. We arrived 5 mins before, and a little flustered. But we were there. I went on to Facebook (so we could “go live”), and Andrew tried to fix the front wheel alignment as best he could. We were ready.

☘”Race start”
I said 4 words to Andrew as we were about to start - I said “Take me home brother”.

☘Starting up front”
As we started 5 mins before the elite runners, Andrew and I, “lead Comrades” for about 6 or 7 minutes. But to be fair, I lead, as Andrew was just behind me! Just saying..... It was wonderful to see Shirls and Legend about 1 km into the race!!!!

☘”Race pace”
We never wavered on our pace time - we were always in and around 7:20 per km. Cuzzie is a proper planner, that lightie. Clive Mingay you beauty!

☘”Cellphone”
My cell had a problem, a few hours into the race, so I couldn’t film or take phones (I later borrowed Doody’s cell). Andrew said to me that it would allow me to “just enjoy the moment”. In hindsight, it was exactly what I needed. I took it all in, without any distractions. Anyway, so many people documented our Journey, so all the photos, and videos, are there on social media. I managed to post the start video. Incredibly, this was viewed 4,400 times! That’s crazy.

☘”Social media”
To anyone who doesn’t understand the power of social media (and I’m not giving my business a punt here!!!!!), look what happened. It blew up. Great marketing is driven by “stories”, and creating stories about your product, or brand. It can be done with all products and brands. This “story” wasn’t about MS. This story was about “Brand Big G”, and the “story” was about friendship. True friendship, and sacrifice.

☘”Race support”
This could be a story in its on right. The race was incredible. I can’t explain the support for our team. There were 400 “Big G Caps” out there, and thousands upon thousands of mates on the road, as well as family and friends glued to their TV sets. I can’t name everyone I saw on the road for fear of leaving too many people out. But, from myself, Andrew, and our team, we thank you. You were incredible. You lifted us, you inspired us, you were screaming, you were deafening, you were electric, and we loved every second of it. We were always counting down the kms to see you, then we’d see other friends, then we would see you again. And so forth. 90.184 kms of friends and family - what an incredible journey. We will always be indebted to you, and we saw every one of you.

☘”Emotional moments”
There were far too many to mention, but one was quite emotional for Cuzzie, Kevie, and Mike. They are Kearsney Old Boys (I never went to Kearsney as I never had a criminal record - I didn’t know it was compulsory!). Also, Cuzzie, and Kevie, have sons there. We did a talk at Kearsney last week, to the entire school. So when we came past all the Kearsney boys, outside their school, adorned with Kearsney flags, the boys went mental!

☘”Pain”
We all popped a few pain killers on the day. I think I might have won that competition by a country mile!

A. Andrew, Stalker, Kevie, Mikey, Greig, Dame, Toolman, and Kingpin. You were incredible.

B. The boys who crossed the line, by my side were Andrew, Stalker, Mikey, and Greig.

C. Unfortunately, Toolman made it to 50km but, brother, you were part of the Journey for 10 months, and you gave it a go. I’m proud of you. Thank you.

D. Unfortunately, Kevie made it to 72km, and had to pull out. Kevie presented me, yesterday, with his last Comrades medal, which he won 14 years ago, in a selfless tribute to our friendship and Journey together. That touched me so much my brother. What a gesture! Thank you Kevie.

E. Kingpin never caught up to us, but finished with under 5 mins to spare. Well done Kingpin!

F. Dame Hand (all the way from Ireland, and an old school mate) never ever wanted to run Comrades, until he read our story. Dame started in F Batch and, 2 mins into his race, stepped in to a stormwater drain, badly twisting his ankle. It swelled so severely that the medics wanted to cut his shoe off to treat him. He wasn’t having any of it. They said his race was over. But not for Dame. Miraculously, the Fighting Irishman, finished in 11:30. That’s a hard man. So proud of you brother.

☘”Coming in to the stadium”
I don’t have to explain to everyone what happened here. Everyone must have seen it on SABC, or social media. It was electric; it was incredible; it was mind blowing. The crowd went wild! On our way around the stadium field, we were geeing the crowds on. I got off the chair about 50m before the finish. I acknowledged the crowd, and pointed up at our supporters in the top level of the stands. We saw you. We loved seeing you. I had always planned to get off the bike 50m before the end - we do it for all our races. This pesky MS thing might “get me at times”, but I was determined to walk across the line, arm-in-arm with my brothers. And we did. It was emotional. We finished in 11:16:53. We did an interview for SABC and the Daily News straight after; also on an East Coast Radio clip. A nice touch by Rowan James, Comrades Race Director, who went and got all our medals for us.

☘”My MS”
In the stadium, I forgot about my MS for a moment. That moment I savored. It was all I needed.

Part 2 AHSCT - In late Aug I hope to start my most challenging journey, AHSCT (Autologous Hematopoietic Stem Cell Transplant). While the Chemo and Stem Cell Transplant will not cure any damage that has already been done, it is hoped that it may slow down the progression for 4 to 5 years, and extend my time not confined to a wheelchair. This will be my most challenging journey, and I need all of you, fighting in my corner. So, please keep following “The Journey” - it’s only just started. I need you, and my family needs you. The treatment is risky, but it’s time to do it. Everyone will have to be in their “Big G caps” on the 20th Aug (may have to do another batch of caps!).

Part 3 - We’d like to, provided I have recovered from my Stem Cell Treatment, to tackle the 2 Oceans Ultra Marathon next year. This Journey can’t stop!

❤To everyone - Doody, Matt, Jess, and I, thank you for everything you have done for us. We know what you all did. It never, once, went unnoticed. Thank you.

It’s a crime being this so damn handsome!
The Handsome One.
Big G. 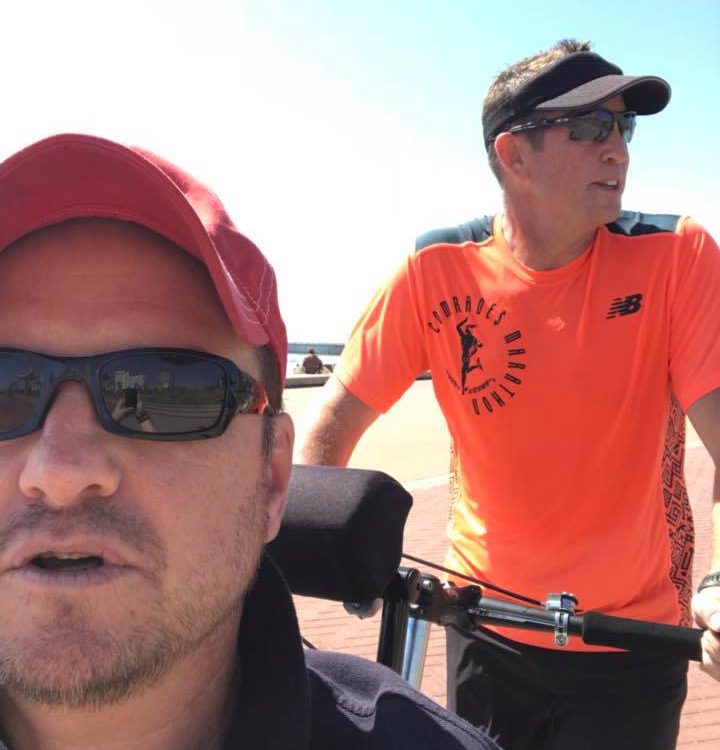